How to switch from NetworkManager to systemd-networkd on Linux
5 March, 2021 by

In the world of Linux, adoption of systemd has been a subject of heated controversy, and the debate between its proponents and critics is still going on. As of today, most major Linux distributions have adopted systemd as a default init system.

Billed as a “never finished, never complete, but tracking progress of technology” by its author, systemd is not just the init daemon, but is designed as a broader system and service management platform which encompasses the growing ecosystem of core system daemons, libraries and utilities.

If you are happy with the way systemd is evolving, one thing you can consider is to switch from NetworkManager to systemd–networkd. If you are feverishly against systemd, and perfectly happy with NetworkManager or basic network service, that is totally cool.

But for those of you who want to try out systemd–networkd, you can read on, and find out in this tutorial how to switch from NetworkManager to systemd–networkd on Linux.

For other distributions, check the version of your systemd before proceeding.

Switch from Network Manager to Systemd-Networkd

It is relatively straightforward to switch from Network Manager to systemd–networkd (and vice versa).

You also need to enable systemd–resolved service, which is used by systemd–networkd for network name resolution. This service implements a caching DNS server.

Once started, systemd–resolved will create its own resolv.conf somewhere under /run/systemd directory. However, it is a common practise to store DNS resolver information in /etc/resolv.conf, and many applications still rely on /etc/resolv.conf. Thus for compatibility reason, create a symlink to /etc/resolv.conf as follows.

To configure network devices with systemd–networkd, you must specify configuration information in text files with .network extension. These network configuration files are then stored and loaded from /etc/systemd/network. When there are multiple files, systemd–networkd loads and processes them one by one in lexical order.

Let’s configure DHCP networking first. For this, create the following configuration file. The name of a file can be arbitrary, but remember that files are processed in lexical order.

If you want to assign a static IP address to a network interface, create the following configuration file.

Once you are done with creating configuration files, restart systemd–networkd service or reboot.

Check the status of the service by running: 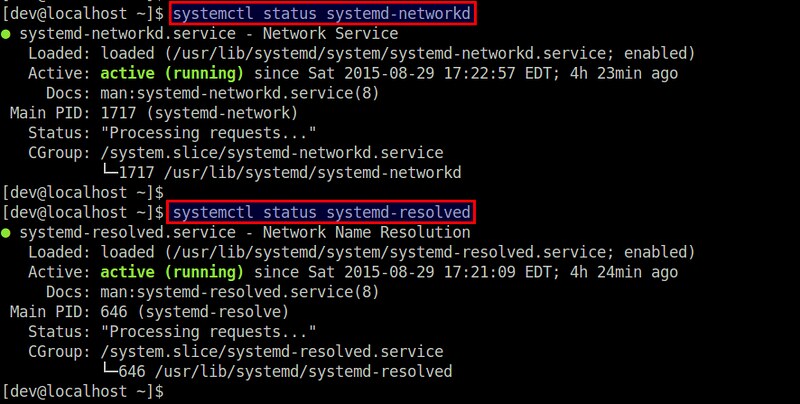 systemd–networkd also allows you to configure virtual network devices such as bridges, VLANs, tunnel, VXLAN, bonding, etc. You must configure these virtual devices in files with .netdev extension.

Here I’ll show how to configure a bridge interface.

If you want to create a Linux bridge (br0) and add a physical interface (eth1) to the bridge, create the following configuration.

Then configure the bridge interface br0 and the slave interface eth1 using .network files as follows.

You can use brctl tool to verify that a bridge br0 has been created.

When systemd promises to be a system manager for Linux, it is no wonder something like systemd–networkd came into being to manage network configurations. At this stage, however, systemd–networkd seems more suitable for a server environment where network configurations are relatively stable. For desktop/laptop environments which involve various transient wired/wireless interfaces, NetworkManager may still be a preferred choice.

For those who want to check out more on systemd–networkd, refer to the official man page for a complete list of supported sections and keys.

in Our Blogs
Sign in to leave a comment
Read Next
DNS resolution for LXC in Ubuntu 14.04